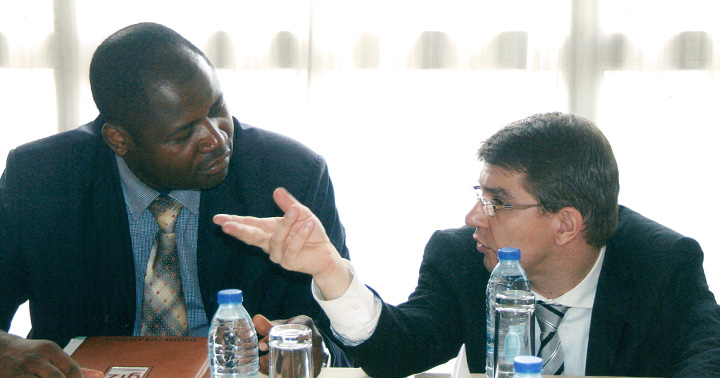 Mario Klee is team leader of the “Program to Support the Implementation of the Paris Declaration (PAEDP) – Development of an M&E System for the national development strategy” in Cameroon. He shares his experience with M&E systems with us.

Mario, could you briefly describe the project that you are running?

Within the project concerning the Paris Declaration in Cameroon, our consortium AMBERO-ICON has been entrusted to manage the development and implementation of an IT-based M&E system for the national development strategy (DSCE). The primary goal of the project is to strengthen the capacity of the ministries that are responsible for the national development strategy: the Ministry of Economy, Planning, and Regional Development (MINEPAT) and the Ministry of Finance (MINFI).

Why is a M&E system important for the national development strategy?

A results-based budgeting is only possible with a working monitoring system. It delivers important information to improve plans. In other words, only in that way you can effectively adjust a policy or program.

How did you and your team develop the M&E system?

First, a participative analysis of the current system was carried out with agents of MINEPAT and ST CTSE (See footnote 1). Together, we analyzed strengths and weaknesses in order to deduce and prioritize possible improvement measures.

Two priorities were identified. On the one hand, goals and indicators had to be better formulated; on the other hand, the procedures and processes as well as the instruments used for the national M&E system had to be clearly defined.

For the first priority, a strengthening process of MINEPAT’s capacities was started. The intervention at this level has a high leverage effect, as MINEPAT is in the end responsible for all sector strategies developed by sector ministries.

MINEPAT´s capacities were strengthened through trainings about how to plan and monitor a strategy using formulated goals and indicators. In a next step and based on what was previously assimilated, we developed – together with MINEPAT- education modules as well as Training-Trainers-courses. In March 2014 MINEPAT conducted its first trainings on its own.

For the second priority, a manual with the system’s processes was produced together with a working group including agents of MINEPAT, MINFI and ST CTSE. It comprises specific instruments to monitor the indicators which were formulated beforehand (first priority), as well as their operationalization. In the current phase, procedures and processes are being applied, analyzed and reviewed. Changes are systematically included in the manual. In that way, processes and therefore the manual are continuously adapted.

What would you recommend to a team leader or to people involved in the development of a M&E system?

It is extremely important to clarify and prioritize the use of such a system. It helps make adequate decisions especially as far as technical questions are concerned. It makes a big difference whether you use the system to render accounts to the parliament and the population (with a focus on final benefits) or to improve the administration’s efficiency (with a focus on internal procedures, for example).

What was your biggest challenge so far?

To follow the complex institutional landscape with its in part parallel running processes and to bring together actors, in order to avoid contributing to a further fragmentation of initiatives.

Mario Klee holds a degree in Political Science with a focus on development policies. He has many years of experience in Western Africa, especially in Togo, Benin and Cameroon. He has been working for AMBERO as a project manager and a short term expert since 2011. He is currently AMBERO team leader of the project “Program to Support the Implementation of the Paris Declaration (PAEDP) – Development of an M&E System for the DSCE”. Mario is an experienced moderator, trainer, project leader and consultant in the field of Good Governance, Decentralization, strengthening of the civil society, monitoring and evaluation of public capital budgets.

More information on our project in Cameroon here!