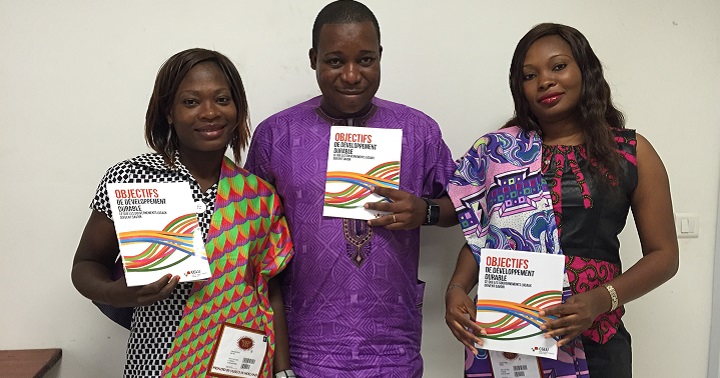 The Sustainable Development Goals had hardly been ratified by the United Nations before the AMBERO team of the decentralization program in Benin started taking them into account in their daily work. First, to get the almost 20 staff-members well acquainted with the 17 SDGs and the many sub-goals that are relevant for their work, a written test was organized. For the three best there was a prize, a traditional African Wax cloth!

On a more serious footing the experts then start using their newly gathered knowledge in their daily work for and with the Benin municipalities:

Since the beginning of this year, the (spatial) planning experts are working on five-year local development plans, elaborated by local governments and with the participation of civil society. A new feature is that several SDGs are already being used as guidelines. During the development of the plan, and later during the implementation of planned activities, the team pays attention to the inclusion of relevant SDGs. This concerns for example climate protection and early warning systems (SDG 13: climate action), or local economic development (SDG 8: economic growth). The topics soil conservation and rehabilitation are tackled together with the GIZ’s global program on food security. Both the municipalities and civil society organizations are sensitized on the importance of the SDGs. During the elaboration of the local development plan the new sustainable goals are also discussed in strategic workshops on a local level.

Furthermore, the SDGs are also considered in other topics of collaboration. Thus for instance, in case of public procurement and tendering, attention should be paid to the sustainability as well as to the transparency of the tenders (SDG 12: responsible consumption and production). Particularly the transparency aspect plays an increasing role in the participatory development of a municipal annual budget (SDG 16: peace and justice, strong institutions).

These are some ways the AMBERO experts in Benin currently work on the implementation and vulgarization of the SDG, together with partner municipalities and civil society organizations.