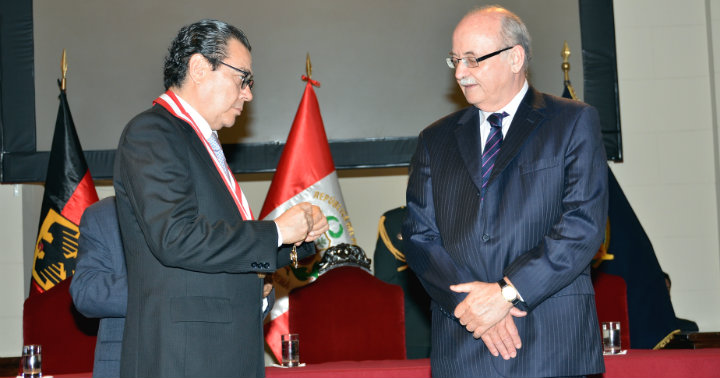 In March, the Peruvian judiciary officially recognized the competent support by the Federal Republic of Germany for the reform of criminal procedures and justice in Peru. Since 2003, GIZ has been advising the Department of Justice, the Supreme Court, the department of public prosecution and the police on their criminal procedures and justice reform.

In this context, AMBERO-Expert and judge Horst Schönbohm was recognized by the Peruvian Department of Justice for his continuous and highly esteemed advisory services with a medal of honor promoting him to the rank of an officer.

Until his retirement, Horst Schönbohm had implemented the GIZ-project on judiciary reform, which AMBERO has been implementing since 2010, as AMBERO Team Leader. Subsequently, he has supported AMBERO as a senior key advisor up to date. Over the last years, the project significantly advanced the institutional processes within the framework of the judicial reform by introducing a new code of criminal procedures. Horst Schönbohm’s commitment to this cause is highly recognized on all levels countrywide.

Horst Schönbohm has more than 30 years of work experience in Latin America under his belt. For many years he represented the Konrad-Adenauer-Foundation in Peru, Costa Rica, Venezuela and Argentina. Among other positions, he directed the Interdisciplinary Center for Latin American Development (Centro Interdisciplinario de Estudios sobre el Desarrollo Latinoamericano CIEDLA) of the Konrad-Adenauer-Foundation in Buenos Aires.

Mr. Schönbohm earned particular recognition for creating a programme on due process reforms on behalf of the Konrad-Adenauer-Foundation in 1991 that remains a milestone for constitutional structures in the region to date. He was also responsible for projects on economic policy, the reform of public administration and political parties in Latin America. Between 1998 and 2010 he was Team Leader on behalf of the GIZ for programmes supporting legal authorities and ombudsman institutions in Bolivia and Peru.

For more information about the AMBERO project “Consolidating the Reform of Criminal Justice Procedure and the Judiciary in Peru” click here.

Date: 02.07.2014
Topics: Medal of Honor from Peru’s Department of Justiceback to overview